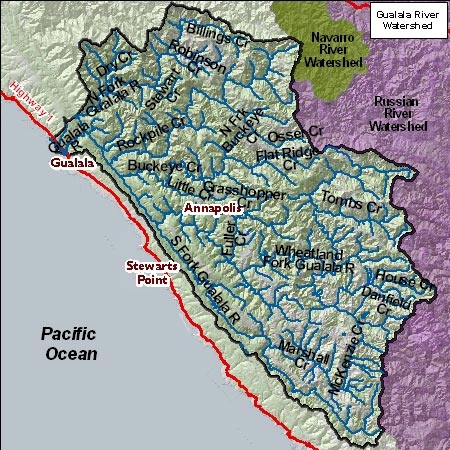 The Gualala River drains a watershed of 298 square miles of steep coastal mountains with numerous creeks. Most creeks are in rocky canyons. There are three major sub-basins: South Fork, North Fork, and Wheatfield Fork. Near the ocean, the river widens out into an estuary. The western and central portion of the Gualala River watershed is covered with dense coniferous forest. Oak woodland and grassland covers the eastern portion of the watershed.

Logging started in the 1860s. Redwood and Douglas fir logs were hauled or floated down waterways to the mill at the river mouth; then the milled lumber was hauled to small coves along the coast. In these coves, there was just enough room for a small ship, also known as a dog-hole schooner, to anchor and load its cargo. Most timber was shipped to San Francisco. In the early 1900s a 22-mile logging rail line was built along the south fork of the Gualala River.

Ridge tops in the Annapolis area were planted with apple orchards. Sheep and cattle ranches covered grass and woodland areas.

In the 1940s-1950s, a population boom in California brought widespread clearcutting of the Gualala forests. Numerous dirt roads were cut and creeks were graded for use as roads in the dry season. Tractors dragged cut trees down steep slopes and along creeks where the trees were loaded on trucks bound for the mill. In less than 20 years, most of the remaining first- as well as second-growth timber was cut.

The effects of this second era of clearcutting included numerous landslides, very high siltation rates, and damaged creeks. During large floods, the confined creeks and river channels filled with more sediment than could be scoured out by the flood waters. Summer stream flow became subsurface and remains this way in many locations. Logging removed most of the trees shading streams. A comparison of 1942 and 1968 aerial photos showed 40-70% of the total stream length exposed by the clearcutting. By 1999 the forest had re-grown to expose 25% of the total stream length.

During the 1990s, vineyards were developed along the grassy ridge tops, replacing the apple orchards. 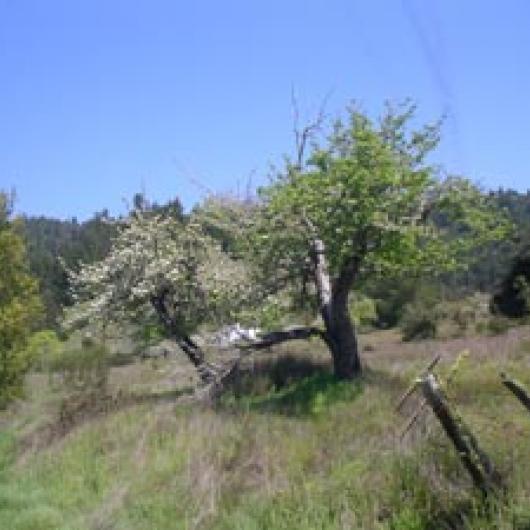 This 141-acre site was formerly an apple orchard. In 2004 the orchards were changed to vineyards. Large creek corridors and several seasonal wetlands were protected on the site. 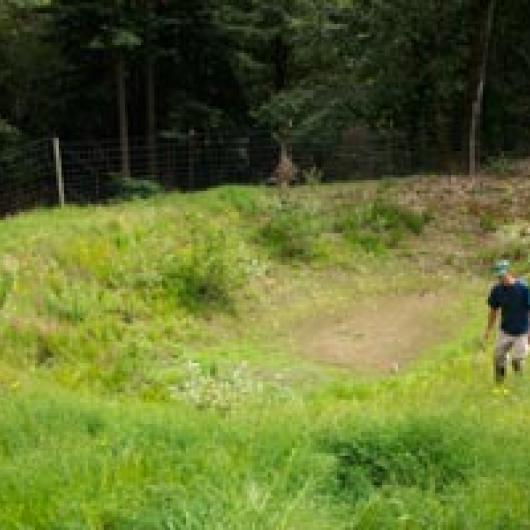 Brothers Nick and Andy Peay developed vineyards on less than 50 acres of this 280-acre site in 1996. This site was formerly occupied by apple orchards, grazing lands, and a homestead. Peay Vineyards encompasses the headwaters of five creeks and uses sediment basins and cover crops to conserve soil and protect water quality.

"We farm organically and have for the past 8 years. We are not certified, however. We are not dogmatic, black and white people, and farming on the coast means we are often thrown curve balls. If we needed to address something that threatens the vineyard – and there is no organic alternative – we would do it to save the vineyard. But we have not for 8 years.

Lastly, we use bio-diesel in our tractors. This allows us to minimize our reliance on certain fossil fuels at the expense of withstanding the smell of French fries while we work. We also power our vineyard and winery via solar panel arrays. Can you taste the effects of these last practices? Probably not, but perhaps the intention behind them."

Cliff Putnam and his family have lived in the Annapolis area since the 1970s. Their 39-acres of vineyard use very little water.  Prior logging operations in this area used creek beds as roads and only recently have the creeks begun to recover.  The Putnams have completed extensive creek and forest improvements. 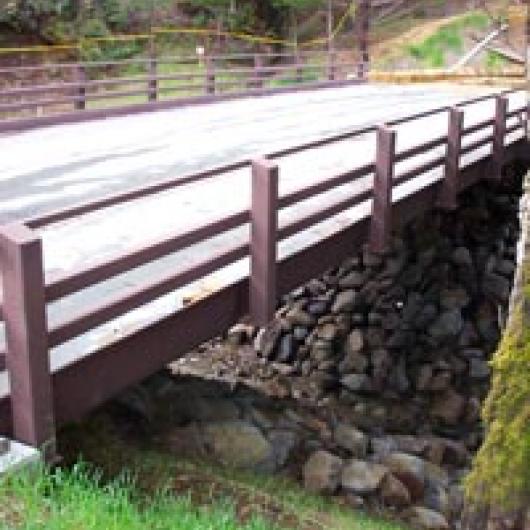 This 391-acre site stretches from the ridge top to the South Fork of the Gualala River and includes a large coniferous forest. The 30 acres of vineyards are located on the ridge top grassland. This area of the watershed was extensively logged in the 1950s and retains numerous eroding hillside roads from this era. As part of the vineyard development the old logging roads were repaired and storm proofed removing a source of sediment. See also Knights Valley site. 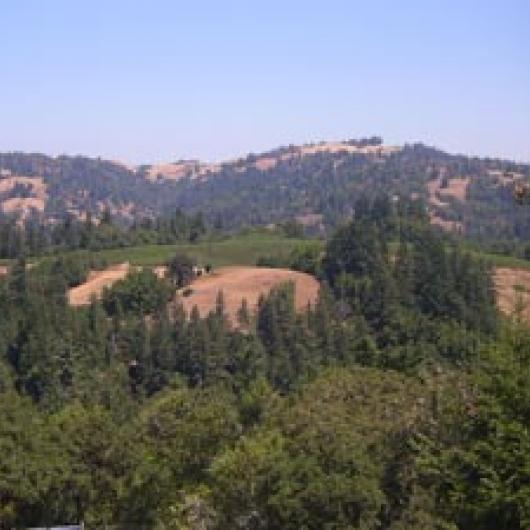 This 70-acre site is located in the headwaters of the South Fork Gualala River on a former organic vegetable farm. Vineyards, which occupy less than half of the site, are managed with no-till methods and extensive drainage improvements to conserve soil and avoid erosion.  See also Waters Ranch in Suisun Creek watershed.