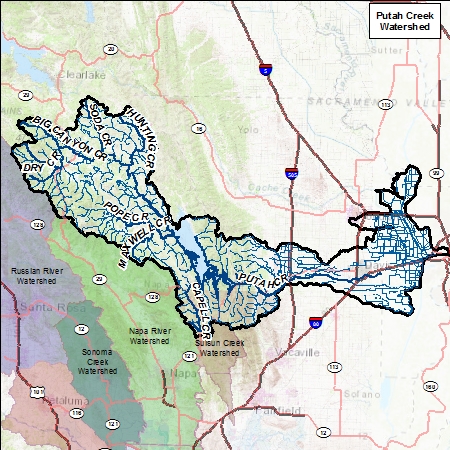 Putah Creek begins in Lake County near Middletown and flows into the eastern side of Napa County eventually reaching the Sacramento River 85 miles from its origin. Jose Berryessa owned the Rancho Las Putas which was split and sold as many smaller farms by 1866. Monticello Valley where Putah Creek courses through Napa County developed the town of Monticello by 1879 and was largely a cattle ranching area. In 1957 Monticello Valley was flooded with the construction of Monticello Dam at Devil’s Gate and the creation of Lake Berryessa. This reservoir has a storage capacity of 1.6 million acre feet and provides irrigation water to Solano and Yolo counties and drinking water to cities in Solano County. Steelhead trout use Putah Creek downstream of the dam where habitat and flows have been restored. Upstream of the reservoir is Pope Valley named for William Pope. William Pope joined with Cyrus Alexander, William Knight and William Gordon on a trip to the Napa Valley in 1841. They stayed at George C. Yount’s home, before the four split up, each claiming a valley for his own. Pope petitioned General Vallejo and the acting governor of California, Manuel Jimeno for a two square league parcel on the east side of Howell Mountain. However in 1843 Pope died in an accident and his land went to his widow and four children. Pope Valley includes many wineries and vineyards as well as cattle ranches.