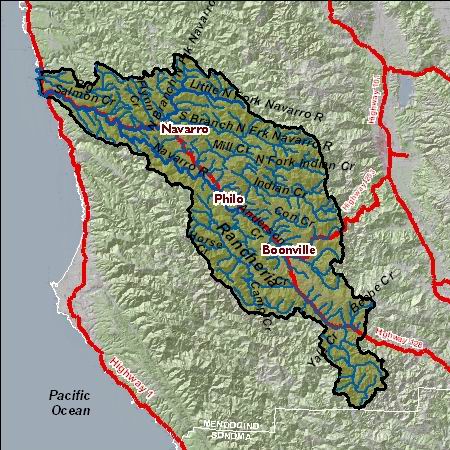 The Navarro River drains a watershed of over 200,000 acres. The Navarro River is formed by the confluence of Rancheria, Indian, and Anderson Creeks in the Anderson Valley. The Anderson Valley extends for 25 miles in the middle of the watershed and is named for William Anderson, one of the first white Americans to see the valley. Redwood forest covers the western end, also called the “deep end,” of the drainage, grading eastward into drier oak woodland, chaparral, and grassland.

By 1852 a series of small settlements dotted the valley, each with its own church, store, and school. The first logging mill was built in 1857 on the Navarro River. Harvest of tan oaks was also an early occupation. Sheep and cattle ranching were widespread, reaching 75,000 sheep and 20,000 cattle by 1880. Apples did very well in Anderson Valley and by the 1940s over 60 apple driers were operating. Vineyards were first planted by Italian immigrants in the Greenwood area, but with Prohibition and a series of extreme frosts, most vineyards were wiped out by the 1940s.

The largest change to the Navarro River drainage occurred with the timber boom of the 1950s. Rapid population growth in California spurred the clear-cutting of most of the forests in the area. Over 50 mills were operating and quickly liquidated the forest into building products, leaving a significant legacy of eroding roads, landslides, and silted streams. After 1973, logging operations became subject to more regulation and resulted in far lower environmental impacts. 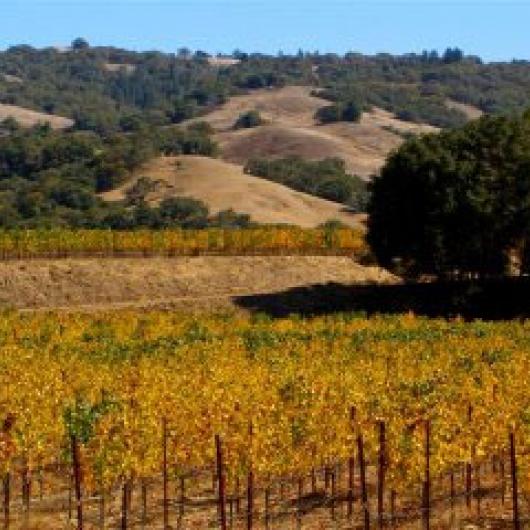 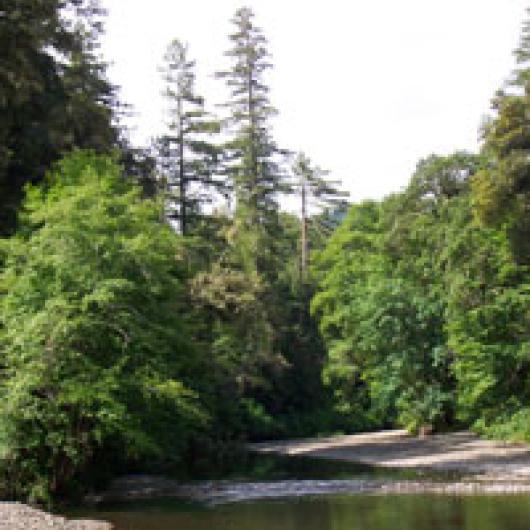 Gowan Creek Ranch is an 80-acre site in central Anderson Valley. Goldeneye Winery converted the property from a thoroughbred horse ranch into a winery and a 38-acre vineyard, bisected by Gowan Creek. The vineyard is managed with sustainable farming practices, including hosting a flock of sheep in the winter as an effective organic alternative to herbicides and fertilizers, while reducing soil compaction and erosion. 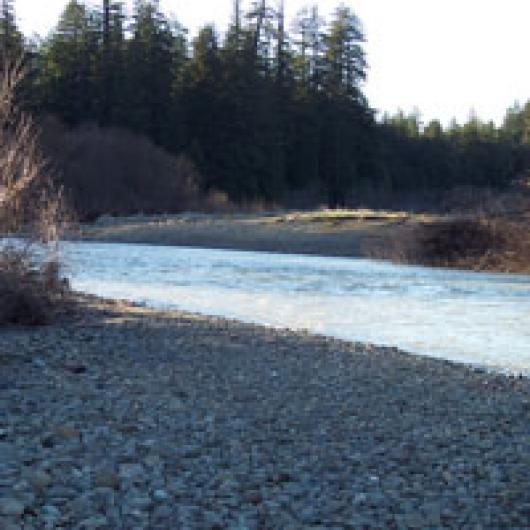 Husch Vineyards was the first winery in Anderson Valley and has vineyards planted in the 1970s on the 23-acre home ranch. Third generation owners Zac Robinson and Amanda Robinson Holstine protect all areas of the vineyard with cover crops and no-till practices. Mill Creek and Lazy Creek form the borders of the property and have well-vegetated riparian corridors. Other sites include Nash Mill Vineyard. 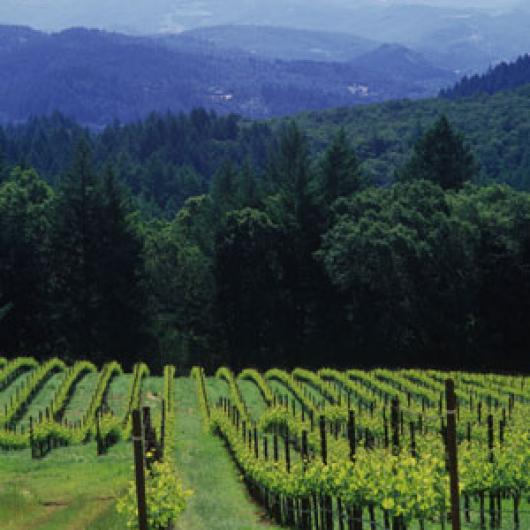 Bordered by redwood forest and the Navarro River, this 62-acre former Christmas tree farm contains 25 acres of vineyard. It is managed with no-till practices and organic growing methods to protect water quality and wildlife habitat. Also see Schramsberg in the Napa River watershed. 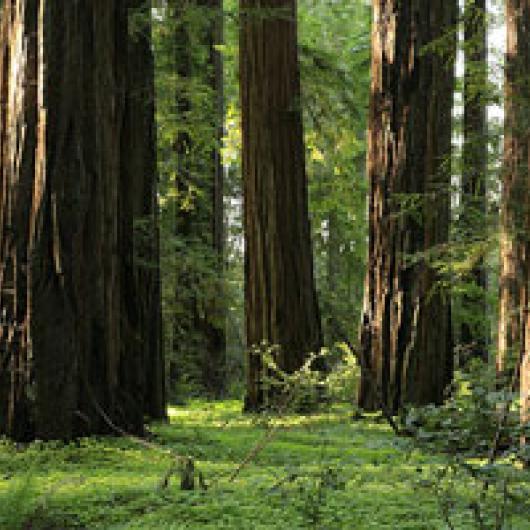 This site encompasses 40 acres of organically farmed vineyards, originally planted in 1973 on a 90-acre ranch north of Philo and south of Hendy Woods in the northern end of Anderson Valley.  The land was tended by a family who farmed it organically since 1999, managing the land to conserve water and prevent soil erosion. Recently it has come under the management of Ferrari -Carano. 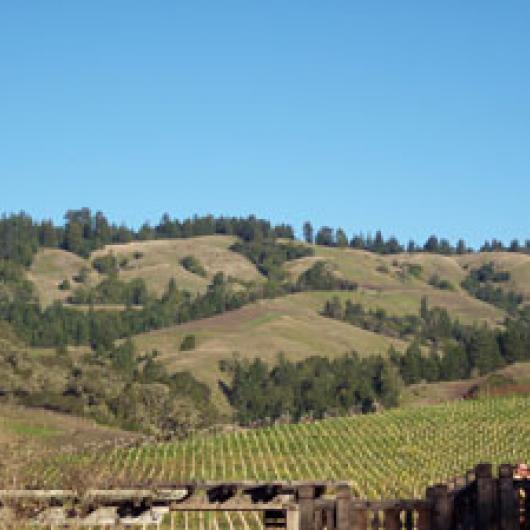 This 942-acre site was the first property to be certified in the Fish Friendly Farming Program in 2002. The 90 acres of vineyards are in separately fenced areas to allow wildlife such as mountain lions and deer to use over 800 acres of wildland on the property. Ted Bennett and Deborah Cahn founded the winery in 1973 and have planted hundreds of redwood and Douglas fir trees on the ranch. In 2008, a road outsloping project was completed to reduce sediment delivery to creeks. Navarro has received an award from the Fish Friendly Farming program for Light Touch Vineyard Development and Operation. Other sites include: Pennyroyal Farm. 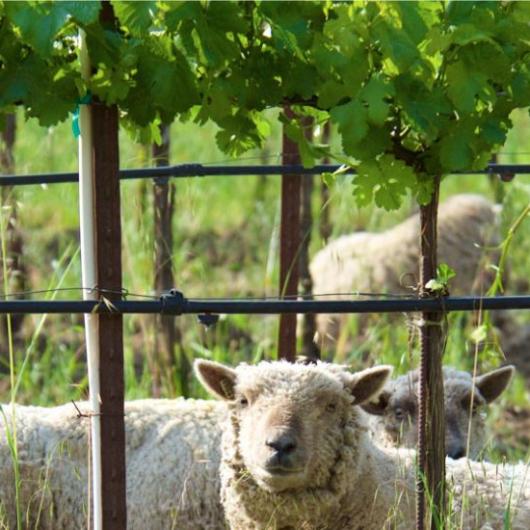 Pennyroyal Farm is committed to sustainability and modern farming practices. It was conceived as a minimum-waste farm and takes into consideration sustainable design—from constructing solar panels on the barn to ensuring the size of the herd would produce enough manure to be converted into compost for fertilizing the vineyards.

This 11-acre vineyard is managed with no-till practices and integrated pest management to protect water quality in the nearby Navarro River. Other sites include Bliss Ranch in the Hopland-Sanel Valley. 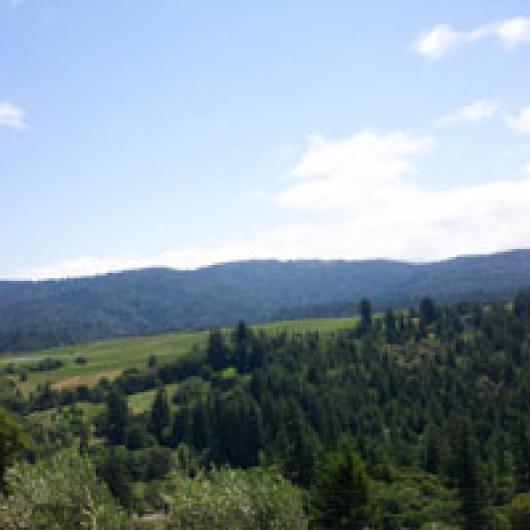 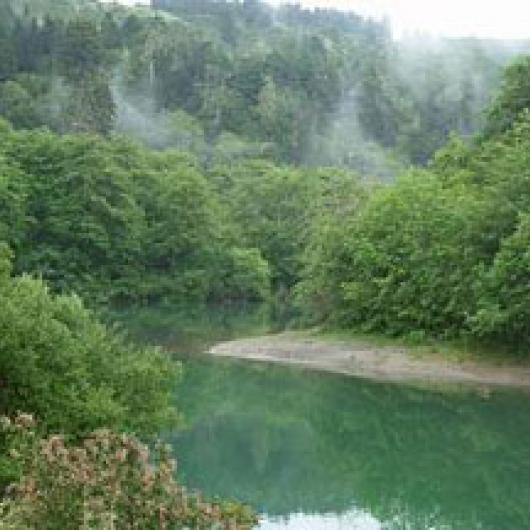 The Narrows Ranch, formerly Floodgate Vineyard, is a 202-acre site with 52 acres of ridge top vineyards in the cooler northern end of the Anderson Valley. Repairs of roads and drainage at the site has been done to address previous land uses, including redwood logging, and to protect the waters of Floodgate Creek, a tributary to the Navarro River. 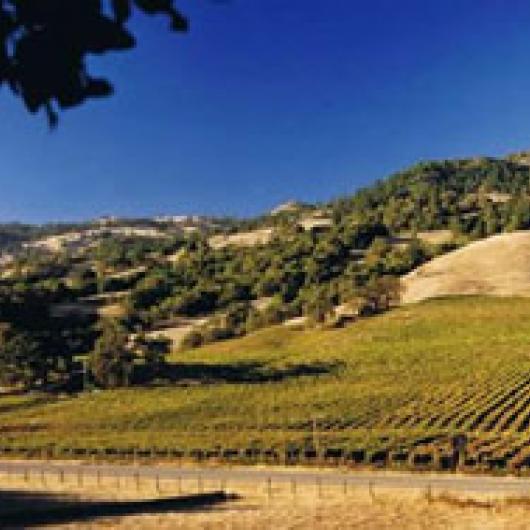 Yorkville Cellars is located in the headwaters of Rancheria Creek, a major tributary of the Navarro River. The 30 acres of vineyard are farmed using organic methods. Owners Deborah and Edward Wallo use miniature Babydoll Southdown sheep rather than herbicides to eat weeds in the vineyard.